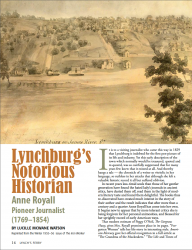 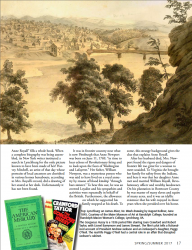 It is to a visiting journalist who came this way in 1829 that Lynchburg is indebted for the first pen-picture of its life and industry. Yet this early description of the town which normally would be treasured, quoted and re-quoted. was so carefully suppressed that for many years few knew that it existed at all. And thereby hang a tale — the chronicle of a writer so vitriolic in her language, so ruthless in her attacks that although she left a valuable historic record it all but suffered oblivion.
In recent years less-timid souls than those of her gentler generation have found the hated lady’s journals in ancient attics, have dusted them off, read them in the light of modern literary taste and found them delightful. The books thus re-discovered have created much interest in the story of their author and the result indicates that after more than a century and a quarter Anne Royall has come into her own. It begins now to appear that by more tolerant critics she is being forgiven for her personal animosities, and blessed for her sprightly record of early American ways.
That modem estimate Peggy O’Neil, “The Gorgeous Huzzy,” gives Mrs. Royall prominent place in its pages. “Forgotten Women’’ tells her life-story in interesting style. American Mercury gave her official recognition in a full article as “The Grandma of the Muckrakers.” “The Life and Times of Anne Royall” fills a whole book. When a complete biography was being assembled, its New York writer instituted search in Lynchburg for the only picture known to have been made of her! Harvey Mitchell, an artist of that day whose portraits of local ancestors are cherished in various homes hereabouts, according to Mrs. Royall’s record, did a drawing of her seated at her desk. Unfortunately it has not been found.
It was in frontier country near what is now Pittsburgh that Anne Newport was born on June 11, 1769, “in time to hear echoes of Revolutionary firing and to look upon the faces of Washington and Lafayette.” Her father, William Newport, was a mysterious person who was said to have lived on a royal annuity by reason of blood kinship “through bars sinister.” To bear this out, he was an avowed Loyalist and his sympathies and activities were repeatedly in behalf of the British. Furthermore, the allowance on which he supported his family stopped at his death. To some, this strange background gives the clue that explains Anne Royall.
After her husband died, Mrs. Newport found the rigors and dangers of frontier life too great for a woman to meet unaided. To Virginia she brought her family for safety from the Indians, and here it was that her daughter Anne met and married William Royall, Revolutionary officer and wealthy landowner. On his plantation in Botetourt County he was master of many slaves and squire of many acres, and it was an idyllic existence that his wife enjoyed in those years when she presided over his home.
To visit under Colonel Royall’s roof came the leaders of the day, to enjoy his hospitality, discuss politics, and plan for their various parts in the new country’s development. Under her husband’s tutorship, Mrs. Royall had received her only education, but was such an apt pupil that she was soon an eager participant in the debates and councils within their walls. The classics of the family library had engaged her until she was steeped in their learning and the schooling denied her in her youth was there abundantly supplied and amplified. In a short time she was able to match wits with the best of their many visitors, among whom were even Washington and Lafayette.
After sixteen years of such happiness her hushand died, and Mrs. Royall suffered a loneliness that amounted almost to distraction. To ease her grief she set forth in her coach, with three servants, for a southern trip. As far as Alabama she traveled, scribbling her impressions as she went, but writing then only for diversion. Back home, meanwhile, her husband’s heirs, children of an earlier marriage, sued for his estate. Returning, Mrs. Royall found herself made penniless by the court’s decision. Left without property or other means of support, she found herself facing poverty at fifty-four. And at that time, when other widows of her age in cap and shawl sat at firesides with their knitting or spinning, Anne Royall began her career!
Taking what little money she could scrape together, she saddled her horse and sruck out through the wilderness — again the pioneer woman. Her destination was Washington, and her object to lay before Congress her claim to a pension as the widow of a Revolutionary officer. On the way she wrote of her experiences in the spicy style that afterward made her famous.
Upon reaching Alexandria her last penny was gone. She was weak and sick from exposure, hunger and worry. Her brave venture had exacted so heavy a toll that it was impossible to press on any farther. Recalling her husband’s stories of Masonic generosity and his firm belief in fraternal aid, she threw herself on the charity of a prominent member of the order. Her faith was handsomely rewarded — he gave her a home and tender care until she was able to proceed to Washington.