You are here: Archives » Spring 2008 » Lewis Hine in Lynchburg 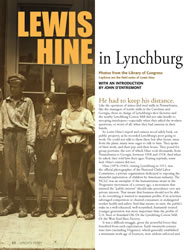 He had to keep his distance. Like the operators of mines and steel mills in Pennsylvania, like the managers of textile mills in the Carolinas and Georgia, those in charge of Lynchburg’s shoe factories and the nearby Lynchburg Cotton Mill did not take kindly to snooping interlopers—especially when they asked the workers questions, or worst of all, when they had cameras in their hands.

So Lewis Hine’s tripod and camera stood safely back, on public property, as he recorded Lynchburg’s poor going to work. He could not talk to them then; but after hours, away from the plant, many were eager to talk to him. They spoke of their work, and their pay, and their hours. They posed for group portraits, the sort of which Hine took thousands, from Pennsylvania to Georgia, between 1908 and 1918. And when he asked, they told him their ages. Fearing reprisals, some lied. Hine’s camera did not.

Hine (1874–1940), visiting Lynchburg in 1911, was the official photographer of the National Child Labor Committee, a private organization dedicated to exposing the shameful exploitation of children by American industry. The NCLC was an exemplar of the humanitarian strain in the Progressive movement of a century ago, a movement that insisted the “public interest” should take precedence over any private interest. That meant that business should not be able to do everything it wanted to maximize profits, if its activities sabotaged competition or cheated consumers or endangered worker health and safety. And that meant, in turn, the public’s stake in a well-educated, well-nourished, humanely treated younger generation was more important than the profits of U.S. Steel or Standard Oil. Or the Lynchburg Cotton Mill. Or the West End Shoe Factory.

John d’Entremont is Theodore H. Jack Professor of History at Randolph College in Lynchburg, Virginia. He is concerned most centrally with Southern and Virginia history, women’s history, and the history of reform and social change. His book Southern Emancipator (Oxford University Press, 1987) won the Allan Nevins Prize of the Society of American Historians, the Gustavus Myers Prize, and was nominated for the Pulitzer Prize in biography. He is currently completing a history of Virginia from the dinosaurs to the present, “Endowed by Their Creator”: The Story of Virginia in the Saga of America.