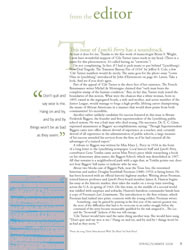 This issue of Lynch’s Ferry has a soundtrack.
At least it does for me. Thanks to the fine work of musicologist Bryan S. Wright, I now have wonderful snippets of ’Cile Turner tunes stuck in my head. (There is a name for this phenomenon. It’s called having an “earworm.”)

I’m not complaining. In fact, if I had to pick music to put behind “Lynchburg’s New Deal Tragedy: The Transient Bureau Fire of 1934” by Jeffrey S. Cole, a few ’Cile Turner numbers would do nicely. The same goes for the photo essay “Lewis Hine in Lynchburg” introduced by John d’Entremont on page 40. Listen. Take a look. And see if you don’t agree.

Part of the appeal of ’Cile Turner is the sheer fact of her existence. The French Renaissance writer Michel de Montaigne claimed that “each man bears the complete stamp of the human condition.” But, in her day, Turner truly tested the boundaries of this notion. What were the chances that a white woman, born in 1895, raised in the segregated South, a wife and mother, and active member of the Junior League, would manage to forge a high-profile, lifelong career championing the music of African Americans in a manner that would draw praise from both communities? It’s incredible.

Another rather unlikely candidate for success featured in this issue is Abram Frederick Biggers, the founder and first superintendent of the Lynchburg public school system. He was a frail man who died young. His successor, Dr. E. C. Glass, expressed amazement at Biggers’ accomplishments, saying: “Though Superintendent Biggers came into office almost devoid of experience as a teacher, and, certainly devoid of all experience in the administration of public schools, a large measure of his success attended his services from the first, as if he had en­joyed all the advantages of a trained expert.”