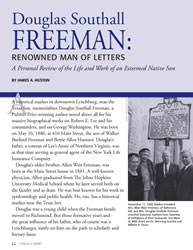 A historical marker in downtown Lynchburg, near the Texas Inn, memorializes Douglas Southall Freeman, a Pulitzer Prize-winning author noted above all for his massive biographical works on Robert E. Lee and his commanders, and on George Washington. He was born on May 16, 1886, at 416 Main Street, the son of Walker Burford Freeman and Bettie Allen Hamner. Douglas’s father, a veteran of Lee’s Army of Northern Virginia, was at that time serving as general agent of the New York Life Insurance Company.

Douglas’s older brother, Allen Weir Freeman, was born at the Main Street house in 1881. A well-known physician, Allen graduated from The Johns Hopkins University Medical School where he later served both on the faculty and as dean. He was best known for his work in epidemiology and public health. He, too, has a historical marker near the Texas Inn.

Douglas was a young child when the Freeman family moved to Richmond. But those formative years and the great influence of his father, who of course was a Lynchburger, surely set him on the path to scholarly and literary fame.

On A Troop Train
I first encountered the writing of Douglas Southall Freeman while traveling on a troop train from California to Alabama in April 1943. Our battalion commander had just obtained a copy of the first two volumes of Lee’s Lieutenants: A Study in Command (a third and final volume was published in 1944). Knowing my interest in history, he thought I might want to take a look. There was little to do during the long days and nights on the train, so I was able to read with little interruption. I found the reading fascinating and remarkably relevant.

James A. Huston was professor of history at Purdue University for twenty-six years and dean of the college and professor of history and international relations at Lynchburg College for twelve years before his retirement. He holds B.A. and M.A. degrees from Indiana University and a Ph.D. from New York University. Dr. Huston is a member of the Lynch’s Ferry editorial board.