“The Gipper” In Lynchburg 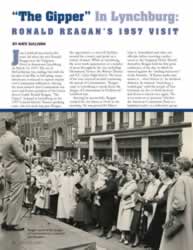 Jean Litchford was twenty-five years old when she met Ronald Reagan near the Virginian Hotel in downtown Lynchburg on March 14, 1957. The era of McCarthyism was ending, but with the broader Cold War in full swing, many Americans continued to express anxiety over Communist infiltration. Among the most staunch anti-Communists was actor and former president of the Screen Actors Guild, Ronald Reagan. “The Gipper” stopped in Lynchburg on his 1957 General Electric Theater speaking tour—the ten-week trip gave Reagan the opportunity to visit GE facilities around the country and speak on a variety of issues. While in Lynchburg, the actor made appearances at a number of spots throughout the city, including Monument Terrace, the Warner Theater, and E.C. Glass High School. The focus of his tour centered around countering the spread of Communism. “Reagan came to Lynchburg to speak about the danger of Communism in Hollywood,” Litchford says.
Arriving by automobile, Reagan reached the city limits at 10:30 in the morning. He was greeted by Mayor John L. Suttenfield and other city officials, before receiving a police escort to the Virginian Hotel. Shortly thereafter, Reagan held his first press conference of the day, in which he warned against the “smiling maneuvers” of the Kremlin. “If Russia smiles and means it… don’t believe it,” he declared. America, he insisted, “must keep a loaded gun” until the people of East Germany are free to hold elections and Korea is united once again.

Nate Sullivan has lived in Lynchburg since 2004. He is a sixth grade history teacher at Bridges Child and Adolescent Treatment Center. He earned a B.S. in social science and a M.Ed. from Liberty University. Currently he is pursuing a M.A. in history through the University of Nebraska at Kearney. His focus is American twentieth-century history. Nate worked as volunteer with the Lynchburg Museum System in 2010. He would like to thank Jean Litchford, the News & Advance, and the Lynchburg Museum System. This is his first published article.