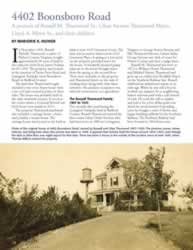 In November 1906, Russell Melville Thurmond, a native of Nelson County, Virginia, bought approximately 38 acres of land in two adjacent tracts from James Holmes for $11,000. The property was located at the junction of Trents Ferry Road and Lexington Turnpike (now Boonsboro Road) in Bedford County.
The land that Thurmond bought included a two-story frame house with a tin roof and covered porches on three sides. The house was probably built in the early twentieth century. It stood at the corner where a Colonial Revival red-brick house now stands in 2011.
The property Thurmond purchased also included a carriage house, a barn, and possibly a tenant house. The carriage house was located in the back at what is now 1025 Greenway Court. The barn was located at what is now 4310 Greenway Place. A spring at a low point on the property provided water for the house. A windmill-operated pump adjacent to the house brought water from the spring to the second floor. There were orchards on the property, and Thurmond hired out the task of tending them along with other farm activities. His primary occupation was railroad construction, not agriculture.

The Russell Thurmond Family:
1907 to 1925
Two months after purchasing the Lexington Turnpike land in Bedford

Ohio native Marjorie Huiner has lived with her family in Lynchburg since 1975. After her retirement from Centra, she began pursuing two passions: quilting and delving into neighborhood history. Marjorie has been researching the people who lived and worked on the 1,100-acre plantation established by William Scott and his wife Ann Jones Scott in 1784. The property was located along the James River in Campbell and Bedford Counties. The story spans two centuries and is nearly complete.


^ Top
Previous page: A Century of Contemporary Art
Next page: “The Gipper” In Lynchburg
Site Map