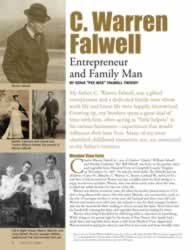 My father, C. Warren Falwell, was a gifted entrepreneur and a dedicated family man whose work life and home life were happily intertwined. Growing up, my brothers spent a great deal of time with him, often acting as “little helpers” in his various businesses—experiences that would influence their later lives. Many of my most cherished childhood memories, too, are connected to my father’s ventures.

Meadow View Farm
Charles Warren Falwell Jr., son of Charles “Charlie” William Falwell and Martha Catherine “Sis” Bell Falwell, was born on his parents’ dairy and vegetable farm, Meadow View, in Campbell County, Virginia, on November 19, 1897. He was the third child. The Falwells had six children—Carey H., Blanche, C. Warren, C. Rosser, Garland W., and Carl D.—only five of whom survived. Rosser was just a toddler when he died owing to a tragic wood-stove accident. Warren, who was about seven years old at the time, recalled the awful incident for the rest of his life.
Warren was almost seventeen years old when his mother passed away in 1914 after a long illness with cancer. His only sister, Blanche, not yet nineteen, took on the role of surrogate mother to seven-year-old Garland and three-year-old Carl. Warren and twenty-year-old Carey also helped to care for their younger brothers and run the household while tending to chores around the farm. Their father had his hands full, running his dairy and vegetable farm and providing for them.
Warren often helped his father by delivering milk to customers in Lynchburg. While doing so, he passed right by the home of Etta Tanner. Her family had a

This article is an abridged and edited version of a
48-page book by the same name
published by Pee Wee Twiddy in 2010.
Copies are available for $20 at Blackwell Press, 528-4665.