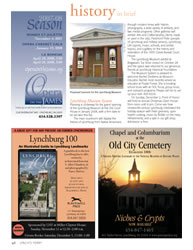 Lynchburg Museum System
Planning is underway for the grand opening of the Lynchburg Museum at the Old Court House in January 2008, with a firm date to be set later this fall.

The main courtroom will display the history of Lynchburg from Native Americans through modern times with historic photographs, a wide variety of artifacts, and two media programs. Other galleries will exhibit: Arts and Craftsmanship (items made or used in the city), Piedmont Pride (people of Lynchburg and military service), Lynchburg Life (sports, music, schools, and similar topics), and a gallery on the history and restoration of the 1855 Greek Revival Court House.

The Lynchburg Museum exhibit at Bragassa’s Toy Store closed on October 28 and the space was returned to our generous friends at Lynchburg Historical Foundation.

The Museum System is pleased to welcome Rachel Deddens as Museum Educator. Rachel most recently served as educator at Poplar Forest. She is booking school tours with an SOL focus, group tours, and outreach programs. Please call her to set up your visit: 455-6226.

On Sunday, December 2, Point of Honor will hold its annual Christmas Open House from noon until 4 pm. Come see how nineteenth-century Lynchburg celebrated the holiday season with fresh greenery, open hearth cooking, music by Riddle on the Harp, refreshments, and a sale in our gift shop. Admission is free.

In August 1969, when Hurricane Camille devastated Nelson County, Virginia, Tinsley was a Virginia state trooper assigned to emergency rescue and recovery. As a witness to the destruction and loss of life, he kept an audio journal to record this history and his reactions to it. Some of his journal entries were published in a local newspaper in 1989.

A student of history, Tinsley knows the importance of recording events for future generations. The collection also includes video diaries of the demolition of Williams Viaduct and the construction of the John Lynch Memorial Bridge in Lynchburg. A set of Tinsley’s photographs document the building of Tara, the Tinsley home in Amherst County, which was constructed using materials from the demolished Boys Building of the Odd Fellows Home in Lynchburg.


Poplar Forest
Thomas Jefferson’s Poplar Forest hosted its annual Archaeology Open House on Saturday, October 6, featuring a free behind-the-scenes look at the excavation underway and a rare opportunity to visit the archaeology laboratory.
Jack Gary, director of archaeology and landscapes, showcased the latest findings at the current excavation and demonstrated techniques used to recover artifacts. Located about 200 yards from the main house, the “mystery site” is yielding a steady stream of Jefferson-period artifacts, but its exact function has not yet been pinpointed.

Meantime, work continues on the wing of the main house. This year’s most dramatic achievement was the striking classical entablature completed along the wing’s 100-foot-long walls. In addition, the handcrafted reconstruction of the first layer of Jefferson’s intricately engineered two-layer roof was protected by a modern waterproof membrane that will be out of sight once the final roof layer is installed. Work can now begin on the top roof layer, the flat deck of what Jefferson called his “terras”—an engineering achievement in an era when the technology for a flat deck did not exist as it does today. During 2008, attention will turn to handcrafting the doors and windows to complete the wing’s exterior. Once completed, the deck roof of Jefferson’s “wing of offices” will enable the public to “sally out with the owls & bats” on the wing’s “terras” roof, as Jefferson did in the evenings with his granddaughters.


Legacy Museum
Someday: The Fall of Jim Crow in Central Virginia, 1865-1981 is currently on exhibit at the Legacy Museum of African American History, 403 Monroe Street, Lynchburg. Museum hours are 12-4 Wednesday through Saturday and 2-4 Sunday. Groups may also visit by appointment. For more information, call Cheryl Stallings, museum administrator, at 845-3455, or e-mail the museum at legacymuseum@ntelos.net.

Legacy collectors have already begun work on the museum’s next exhibit, For Our Own Good: African American Civic and Social Groups in Central Virginia from the Beginning to the Present. Dianne Swann-Wright, curator and director of the Frederick Douglass–Isaac Myers Maritime Park in Baltimore, will serve as guest curator, with assistance from Lauranett Lee, founding curator of African American History at the Virginia Historical Society, and Katherine Chavigny, associate professor of history at Sweet Briar College. For Our Own Good will open to the public on Sunday, June 22, 2008.


Historic Sandusky
Local author, historian is honored.
The Houck History Center at Historic Sandusky was recently dedicated in honor of Dr. & Mrs. Peter W. Houck for their unstinting efforts to preserve and share Lynchburg history. The history center includes a classroom & library for use by visiting groups and schools. About 100 friends of Peter & Betsy were on hand for the surprise unveiling.