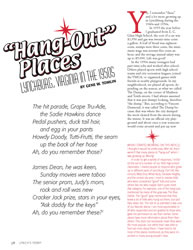 Yes, I remember “these” and a lot more growing up in Lynchburg during the 1940s and 1950s.
In 1955 the year before I graduated from E. C. Glass High School, the cost of a car was $1,950 and gas was twenty-nine cents a gallon. A loaf of bread was eighteen cents, stamps were three cents, the minimum wage was seventy-five cents an hour, and the average annual salary was up to $5,000. Life was good!
In the 1950s many teenagers had part-time jobs and worked after school. Others played sports with high school teams and city recreation leagues, joined the YMCA, or organized games with friends at nearby playgrounds. In my neighborhood, we played all sports, depending on the season, at what we called The Dump, on the corner of Madison and Tenth streets. I had always assumed that it was just dumpy looking, therefore “the dump.”

Gene W. Tomlin is a Lynchburg native and lifelong history buff. After graduating from Lynchburg College in 1960, he spent the next thirty-five years as a professional YMCA director, serving associations in Florida, Tennessee, Alabama, Kentucky, California, and South Carolina. He moved back to Lynchburg in 2002 and is really enjoying rediscovering his hometown.