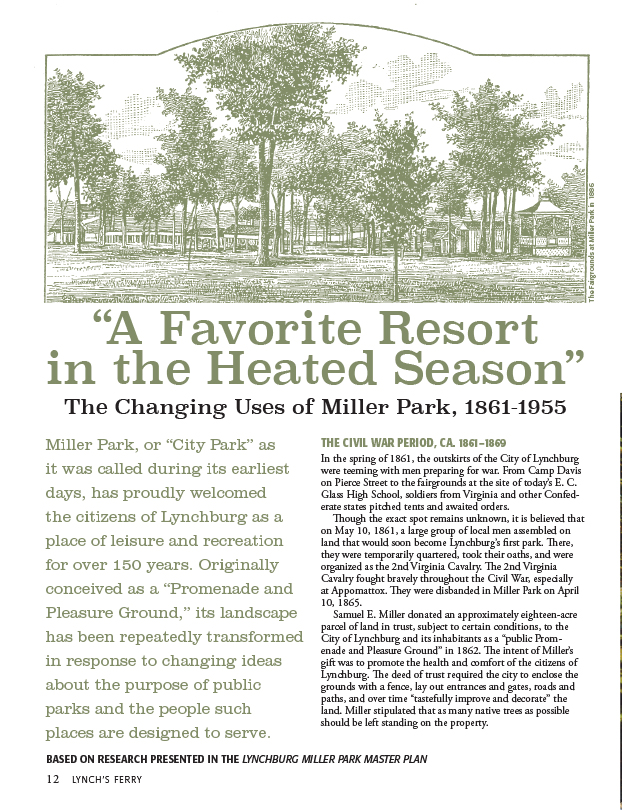 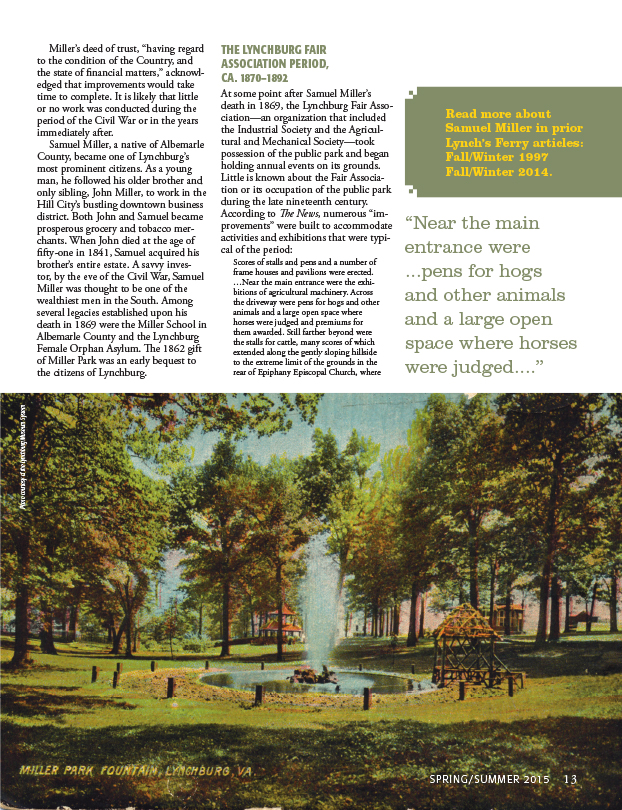 Miller Park, or “City Park” as it was called during its earliest days, has proudly welcomed the citizens of Lynchburg as a place of leisure and recreation for over 150 years. Originally conceived as a “Promenade and Pleasure Ground,” its landscape has been repeatedly transformed in response to changing ideas about the purpose of public parks and the people such places are designed to serve.

In the spring of 1861, the outskirts of the City of Lynchburg were teeming with men preparing for war. From Camp Davis on Pierce Street to the fairgrounds at the site of today’s E. C. Glass High School, soldiers from Virginia and other Confederate states pitched tents and awaited orders.

Though the exact spot remains unknown, it is believed that on May 10, 1861, a large group of local men assembled on land that would soon become Lynchburg’s first park. There, they were temporarily quartered, took their oaths, and were organized as the 2nd Virginia Cavalry. The 2nd Virginia Cavalry fought bravely throughout the Civil War, especially at Appomattox. They were disbanded in Miller Park on April 10, 1865.

Samuel E. Miller donated an approximately eighteen-acre parcel of land in trust, subject to certain conditions, to the City of Lynchburg and its inhabitants as a “public Promenade and Pleasure Ground” in 1862. The intent of Miller’s gift was to promote the health and comfort of the citizens of Lynchburg. The deed of trust required the city to enclose the grounds with a fence, lay out entrances and gates, roads and paths, and over time “tastefully improve and decorate” the land. Miller stipulated that as many native trees as possible should be left standing on the property.

Miller’s deed of trust, “having regard to the condition of the Country, and the state of financial matters,” acknowledged that improvements would take time to complete. It is likely that little or no work was conducted during the period of the Civil War or in the years immediately after.
Samuel Miller, a native of Albemarle County, became one of Lynchburg’s most prominent citizens. As a young man, he followed his older brother and only sibling, John Miller, to work in the Hill City’s bustling downtown business district. Both John and Samuel became prosperous grocery and tobacco merchants. When John died at the age of fifty-one in 1841, Samuel acquired his brother’s entire estate. A savvy investor, by the eve of the Civil War, Samuel Miller was thought to be one of the wealthiest men in the South. Among several legacies established upon his death in 1869 were the Miller School in Albemarle County and the Lynchburg Female Orphan Asylum. The 1862 gift of Miller Park was an early bequest to the citizens of Lynchburg.