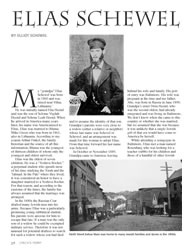 My “grandpa” Elias Schewel was born in 1860 and was raised near Vilna, Lithuania. He was initially named Elia Heend and was the son of Sclome Vigdah Heend and Schone Leah Heend. When he arrived in America many years later, his name was Americanized to Elias. Elias was married to Bluma Mike Green who was born in 1861, also in Lithuania. According to my cousin Arthur Finkel, the family historian and the source of all this information, Bluma was the youngest of thirteen children of whom only the youngest and oldest survived.

Elliot Schewel, a graduate of E.C. Glass High School and Washington and Lee University, is the former president of Schewel Furniture Company and a retired Virginia state senator. During his twenty years in office, Senator Schewel served as chairman of the Senate Education & Health Committee and as a member of the Senate Finance Committee. He received a doctorate in humane letters from Lynchburg College in 2000. Together with his wife, Rosel, a former Lynchburg public school teacher and Lynchburg College professor, he has been involved in numerous local and statewide efforts to enhance education, enliven the arts, and promote civic engagement. This is his first article for Lynch’s Ferry.