You are here: Archives » Fall 2013 » â€œA Freedwoman of Virginiaâ€: Charlotte Scott and the Scott and Rucker Families of Lynchburg

â€œA Freedwoman of Virginiaâ€: Charlotte Scott and the Scott and Rucker Families of Lynchburg 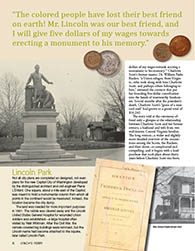 On the eleventh anniversary of Abraham Lincoln’s assassination—April 14, 1876—a monument to the martyred president was dedicated in Lincoln Park, Washington D.C. The day was “declared a public holiday,” and “every one was free to participate in the exercises” which included a parade featuring almost “all of the colored organizations in the city.” The monument, known as the Freedman’s Memorial or Emancipation Statue, had been funded exclusively by donations from African Americans. Fredrick Douglass was the keynote speaker. President Grant was given the honor of unveiling the bronze before an estimated crowd of 25,000.
Among the spectators was an ex-slave named Charlotte Scott. Her presence held a special significance. After Lincoln’s, hers was the only other name on the plaque at the base of the statue:

FREEDOM’S MEMORIAL
IN GRATEFUL MEMORY OF
ABRAHAM LINCOLN
THIS MONUMENT WAS ERECTED
BY THE WESTERN SANITARY COMMISSION
OF SAINT LOUIS MO:
WITH FUNDS CONTRIBUTED SOLELY BY
EMANCIPATED CITIZENS OF THE UNITED STATES
DECLARED FREE BY HIS PROCLAMATION
JANUARY 1 A.D. 1863.
THE FIRST CONTRIBUTION OF FIVE DOLLARS WAS MADE
BY CHARLOTTE SCOTT, A FREEDWOMAN OF VIRGINIA,
BEING HER FIRST EARNINGS IN FREEDOM
AND CONSECRATED
BY HER SUGGESTION AND REQUEST
ON THE DAY SHE HEARD OF PRESIDENT LINCOLN’S DEATH
TO BUILD A MONUMENT TO HIS MEMORY.

Ohio native Marjorie Huiner has lived with her family in Lynchburg since 1975. After her retirement from Centra, she began pursuing two passions: quilting and delving into neighborhood history. Marjorie has been researching the people who lived and worked on the 1,100-acre plantation established by William Scott and his wife, Ann Jones Scott, in 1784. The story spans two centuries and is in progress.
This is Huiner’s second contribution to Lynch’s Ferry. Her portrait of the Thurmond and Myers families, “4402 Boonsboro Road,” appeared in the Fall/Winter 2011 issue. The story of some of Charlotte Scott’s descendants who continued to live on the former Scott plantation will appear in a future issue.
Charlotte’s journey has been an eye-opening expedition for the author, with many confounding twists and turns. Commenting on William and Margaret Rucker’s decisions regarding their slaves, she writes: “While most Southern Unionists were not devoted abolitionists, it is still difficult for a person living in the twenty-first century to understand the dissonance in William and Margaret’s minds that allowed them to free some slaves as an expediency for Margaret’s safety and convenience, and then sell their other slaves for a profit while William was in jail for aiding the Union army.”