You are here: Archives » Fall 2009 » Samuel Spencer and the Trains That Served the South

Samuel Spencer and the Trains That Served the South 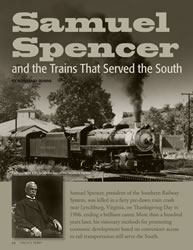 Samuel Spencer, president of the Southern Railway System, was killed in a fiery pre-dawn train crash near Lynchburg, Virginia, on Thanksgiving Day in 1906, ending a brilliant career. More than a hundred years later, his visionary methods for promoting economic development based on convenient access to rail transportation still serve the South.

In the wake of the devastation left by the Civil War, the South faced a formidable struggle to rebuild its economic base and restore methods for transporting raw materials to northern destinations. Progress was steady, but slow. When a downturn in the economic cycle brought about a further economic slump in the 1890s, Southern railroads needed an influx of new capital investment to survive.

Rosemary Dunne has conducted genealogical and historical research for more than twenty-five years, preferring a jurisdictional approach with an emphasis on primary records. She has written articles about local history for Southern Living, Blue Ridge Country, and Blue Ridge Traditions, in addition to short articles and assignments for The Muse, the Amherst County Historical Museum newsletter.

^ Top
Previous page: Lynchburg and Its Canal Era
Next page: The Earl of Lynchburg: The Racing Career of Earl Lee Brooks
Site Map