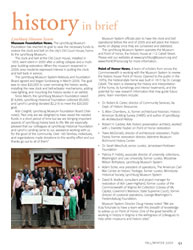 The Lynchburg Museum System Advisory and Foundation Board agreed and began fundraising in March 2009. The goal was to raise $20,000 to cover removing the historic works, installing the new clock and bell-activator mechanisms, adding new lighting, and mounting the historic works in an exhibit.

Rob Craighill, Lynchburg Museum Foundation Board Chair noted, “Not only are we delighted to have raised the needed funds in a short period of time but we are bringing important aspects of Lynchburg history back to life. We are especially pleased that our colleagues at Lynchburg Historical Foundation and Lynch’s Landing came to our assistance working with us for the good of the community. Over 160 families, individuals, and organizations made donations to this worthy effort and our thanks go out to all of them.”

Museum System officials plan to have the clock and bell operational before the end of 2009 and will place the historic works on display once they are conserved and stabilized.
The Lynchburg Museum System operates the Museum ?and Point of Honor, the historic house at 112 Cabell Street. ?Please visit our websites at www.LynchburgMuseum.org and www.PointOfHonor.org for more information.

Point of Honor News. A team of scholars from across the Commonwealth is working with the Museum System to review the historic house Point of Honor. Opened to the public in the 1970s, the Federal-style home was built in 1815 by Dr. George Cabell. The team is reviewing the history and interpretation of the home, its furnishings and interior treatments, and the potential for new research information that may guide future plans. Team members include:

Museum System Director Doug Harvey noted: “We are truly fortunate to have a team with this breadth of knowledge to advise us on Point of Honor. One of the great benefits of working in history in Virginia is the willingness of colleagues to help other museums and historic sites.”

•    December 6 – Christmas Open House: Point of Honor, one of Lynchburg’s architectural jewels, will host its 27th Annual Open House on Sunday, December 6th. The historic home will be decorated with native greenery, as was customary during the early19th century. Join us for period music, refreshments, and special items on sale in our Gift Shop. 112 Cabell Street. (434) 455-6226. Noon to 4 p.m. Free.

Oakland Museum
Oakland News. Oakland, Nelson County’s Museum of Rural History, had a successful spring and summer with six programs commemorating the 40th anniversary of Hurricane Camille drawing more than 1,500 attendees. Oakland is the home of the Hurricane Camille Resource Center with an exhibit and several videos and slide shows documenting the Camille tragedy and the county’s recovery. A second exhibit tells the story of rural electrification and the impact of electricity on county residents. A third room is furnished as a 19th-century tavern reflecting the history of the building.

Oakland will remain open on Saturdays from 10 a.m. to 4 p.m. and Sundays from 1 p.m. to 4 p.m. through mid-December and re-open in March with improvements to the Camille Resource Center. Oakland is located on U.S. 29 about 4 miles south of Lovingston.

Upcoming Events. In addition to exhibits, the Legacy Museum hosts lectures and special events throughout the year. For more information, visit www.LegacyMuseum.org.

•    November 11– Col. William A. McIntosh, president and CEO of the National D-Day Memorial Foundation, will speak at Legacy on Veterans' Day about The 320th Barrage Balloon Battalion (an all Black Battalion) that landed on Utah Beach on D-Day. The presentation, “The 320th Barrage Balloon Battalion on and beyond D-Day,” starts at 7 p.m. No charge but there is limited seating. Please call 434-845-3455 to reserve a place. Legacy Museum, 403 Monroe Street, Lynchburg.

Historic Sandusky
Sandusky News. Lynchburg Melodies: History of the Hill City in Song, an album featuring over 20 tracks of tender melodies and toe-tapping tunes, is now available. The CD can be purchased from Given’s Books, the Lynchburg Visitor Center, and Historic Sandusky. For more information call (434) 832-0162 or order online at www.HistoricSandusky.org.

•    March 17–“The History Of Locally Owned Businesses In Lynchburg” by Representatives of Five Locally Owned Businesses. Bert Dodson for Dodson Bros. Exterminating Co., Ebo Fauber for Fauber Architecture, Mike Baer for Baer & Sons Memorials, Hal Craddock for Craddock-Terry Shoe Co., and Ted Delaney for Diuguid Funeral Home continue a program given in October 2008. Representatives will make a brief presentation about the history of the company and answer questions from the audience. Invite a friend to come and join in reminiscing about days gone by.

•    April 21–“The Academy Of Music, Lynchburg, Virginia: The Golden Age Of Live Performances” by Dr. James M. Elson. Dr. Elson is the author of the 1993 published work of the same name and was the Academy of Music Theatre, Inc.’s first executive director (1984-1988). He will present a history of the near-quarter century (1905-1928) when the great stars of the theater and music world came in person to the Hill City to perform on the stage of the Academy’s acoustically perfect auditorium. His presentation will be illustrated by slides of pictures taken from his book on the Academy and will consider some of Lynchburg’s other theatrical venues during the early twentieth century.

Booker T. Washington National Monument
Upcoming Events. For information about programs and the park, contact a park ranger at (540) 721-2094 or visit the park’s website www.nps.gov/bowa.

•    November 8–Tale of Two Plantations. 2:00 p.m. Visitors will gain insight to the similarities and differences of plantation life and slavery as Beth Ford from the Reynolds Homestead in Critz, Virginia, examines life as it was on the Reynolds Plantation during the mid-nineteenth century and park ranger Betsy Haynes offers a comparison of the Burroughs Plantation in Franklin County with a post-lecture walking tour.

•    November 21–Firin’ Der Tobacco. 2:00 p.m. The cash crop influenced everyone who dwelled on the farm, both free and enslaved. Learn about the curing process and what happened next!

•    November 21–Thomas Jefferson Wine Festival at Poplar Forest, 12 p.m. to 5 p.m. Tasting tickets: $15 in advance, $20 at the gate. Featuring the Bedford Wine Trail, Virginia wineries, historic craft vendors, food, live music, conversations with Thomas Jefferson and wine expert Gabriele Rausse, and much more! House tours will be available throughout the day. The festival will be held in heated spaces and will occur rain or shine. Admission for those 21 and over includes a complimentary wine glass.