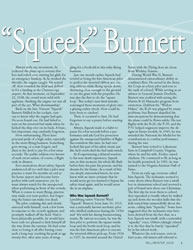 The airplane’s engine was turning up perfectly as the pilot made a thousand feet of altitude and banked gently south of the field for his dive. Spectators in the grandstand made tiny blobs of color against the green of the ground. He kicked the airplane over on its back, squinted briefly at his instrument panel, and eased back on the stick until the nose was just inside the border of the airport.

He would level off at fifty feet and inch down to within five feet of the ground, just in front of the grandstand, to cut a ribbon between two upright poles. The public liked the stunt and paid good money to see it, because it looked dangerous. And as a matter of fact, it was very dangerous. But years in the business had taught this pilot the tricks of stunt flying while maintaining a wide margin of safety, and today, he felt extra sure of himself.

David Fortuna has many years of experience writing general aviation, aviation history, and how-to articles for hobby and trade magazines. An accomplished artist, he has completed many technical drawings and paintings to illustrate aircraft design.

As an active pilot with a commercial license, Fortuna has logged almost 2,000 hours in flying time, is rated for single and multi-engine aircraft, and has checked out with over twenty different types of planes. He has also skydived and flown in sailplanes, hang gliders, para-sails, and hot air balloons.

Fortuna was a member of the resurrected Flying Aces and friends with Squeek and Evelyn Burnett. This article is an abridged excerpt drawn from the front matter and first chapter of the book You Betcha Baby! The Legend of Vincent “Squeek” Burnett by David Fortuna and Evelyn Burnett; © 2008 by David Fortuna. The text has been edited for Lynch’s Ferry readers. Copies of You Betcha Baby! are currently available at Givens Books, Lynchburg, VA; Colonial Restaurant, Rustburg, VA; or contact John D. Barksdale (434) 942-2323 / jdbarksdale@aol.