You are here: Archives » Fall 2009 » Lynchburg and Its Canal Era

Lynchburg and Its Canal Era 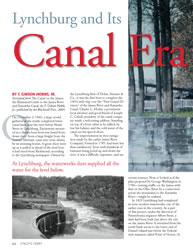 On December 3, 1840, a large crowd gathered at the newly completed lower canal basin near the river below Ninth Street in Lynchburg. Excitement mounted as a distant boat horn was heard from down river. Soon a large freight boat, the General Harrison, came into view, drawn by its straining horses. A great cheer went up as it pulled in ahead of the rival boat it had raced from Richmond, according to the Lynchburg newspaper. Owned by the Lynchburg firm of Dolan, Kinnier & Co., it was the first boat to complete the 146½-mile trip over the “First Grand Division” of the James River and Kanawha Canal. Charles L. Mosby, a prominent local attorney and good friend of Joseph C. Cabell, president of the canal company, made a welcoming address. Standing on top of a boat cabin as he talked, he lost his balance and the cold water of the canal cut his speech short.

Prior to his retirement, Lynchburg native T. Gibson Hobbs, Jr. was an executive with C.B. Fleet and, earlier in his career, with the Lynchburg Foundry Company. He served on the Lynch’s Ferry editorial board for many years and was also a contributing writer. His work appeared in the first edition of the magazine in 1988.

Hobbs attended Lynchburg College and graduated from the University of Virginia with a degree in mechanical engineering. As a member of both the American Canal Society and the Virginia Canals and Navigation Society, his extensive research and numerous slide presentations often focused on the engineering challenges, financial difficulties, and professional rivalries surrounding the canal era. When Hobbs died in 2005, he had almost completed a book on the subject, and his friends rallied to finish the project.

The article in this issue, “Lynchburg and Its Canal Era,” is an excerpt from his book The Canal on the James: An Illustrated Guide to the James River and Kanawha Canal (Blackwell Press, 2009). It has been edited for Lynch’s Ferry readers.