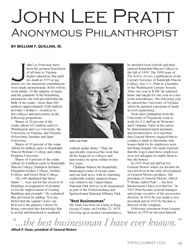 John Lee Pratt may have been the greatest benefactor of all time to Virginia higher education. But until his death in 1975 at age ninety-six, his numerous contributions were made anonymously. In his will he went public. To the surprise of many and the gratitude of the benefitting institutions, his will provided that the bulk of his estate—more than $60 million (approximately $240 million in today’s dollars)—would go to ten colleges and universities in the following proportions:

William F. Quillian Jr. was born in Nashville, Tennessee in 1913. He received his A.B. degree at Emory University and his Ph.D. at Yale University. Dr. Quillian taught philosophy at Gettysburg College and Ohio Wesleyan University before coming to Randolph-Macon Woman’s College, where he served as president from 1952-1978. For the next ten years, from 1978-1988, he was a senior vice president at Central Fidelity Bank. He then joined the Greater Lynchburg Community Trust, where he served as executive director from 1988-1997. Dr. Quillian and his wife, Margaret, continue to make their home in Lynchburg. His last article for Lynch’s Ferry appeared in the Spring/Summer 2004 issue.