You are here: Archives » Spring 2009 » For Our Own Good: Central Virginia’s African American Civic and Social Groups

For Our Own Good: Central Virginia’s African American Civic and Social Groups 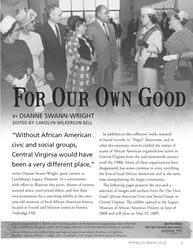 “Without African American civic and social groups, Central Virginia would have been a very different place,” writes Dianne Swann-Wright, guest curator at Lynchburg’s Legacy Museum. In a community-wide effort to illustrate this point, dozens of citizens scoured attics, interviewed elders, and lent their own possessions for a year-long exhibit at the nine-year-old museum of local African American history, located at Fourth and Monroe streets in historic Tinbridge Hill.

In addition to the collectors’ work, research in burial records, in “Negro” directories, and in other documentary sources yielded the names of scores of African American organizations active in Central Virginia from the mid-nineteenth century until the 1980s. Many of these organizations have disappeared, but some continue to exist, enriching the lives of local African Americans and at the same time strengthening the larger community.


Dianne Swann-Wright is director and founding curator of the Frederick Douglass-Isaac Myers Maritime Park in Baltimore and guest curator at the Legacy Museum of African American History in Lynchburg.

Carolyn Wilkerson Bell retired three years ago as Susan Duval Adams Professor of English at Randolph-Macon Woman’s College. She is a member of the Legacy Museum board of directors.