You are here: Archives » Fall 2008 » Jen Ayres: A Remembrance of Her Life and Love of Art

Jen Ayres: A Remembrance of Her Life and Love of Art 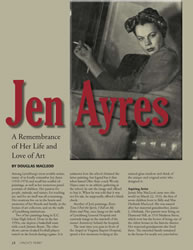 Among Lynchburg’s most notable artists, many of us fondly remember Jen Ayres (1916-1974) and recall her soulful oil paintings, as well as her numerous pastel portraits of children. Her passion for people, animals, and nature, for teaching art, and for art itself was all consuming. Her creations live on in the hearts and memories of her friends and family, in the homes of art collectors, and on the walls of Lynchburg institutions.

Two of her paintings hang in E.C. Glass High School. Done in the late 1950s, one depicts a basketball team with coach Jimmie Bryan. The other shows canvas-cloaked football players seated on the bench during a game. It is unknown how the school obtained the latter painting, but legend has it that when famed Ohio State coach Woody Hayes came to an athletic gathering at the school, he saw the image and offered to buy it. When he was told that it was not for sale, he supposedly offered a blank check.

Another of Jen’s paintings, Every Time I Feel the Spirit, I Fall on My Knees and Pray, once hung on the walls of Lynchburg General Hospital and currently hangs in the stairwell of the nurses’ dormitory behind the hospital.

Douglas MacLeod, a local history researcher and actor, has contributed to Lynch’s Ferry on the Rivermont Athletic Club football team (Fall/Winter 2004/2005) and the outlaw Frank James in Lynchburg (Fall/Winter 2000/2001) among others. He also writes articles on grist mills and the upper James River for Bedford City/County Museum.


^ Top
Previous page: Growing Up in Lynchburg on Wheels with Motors
Next page: From the Editor
Site Map