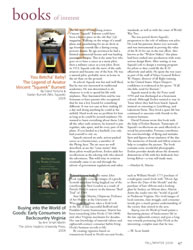 The life story of Lynchburg aviator Vincent “Squeek” Burnett could have been a fiction piece in the old Boys’ Life magazine. Walking on the wings of a small plane and parachuting for an air show at age fourteen sounds like a daring young person’s dream. By age seventeen he had a limited commercial license and was hauling passengers for pay. This is the same boy who goes on to have a career as a stunt pilot, then a military career as a test pilot. Born in 1913, Squeek rode the wave of the early aviators and became one of the best. He was a natural pilot, probably more at home in the air than on the ground.
At school, Squeek was fun and well liked. But he was not interested in traditional academics. He was determined to do whatever it took to spend his life with airplanes. They fascinated him and he was fortunate to have parents who recognized that he was a boy bound for something different.

To local history buffs, the name John Hook typically conjures images of a greedy Scottish merchant being laughed out of the courthouse in New London as a result of Patrick Henry’s oratory in the famous “Beef Trial” of 1789.
Ann Smart Martin, Chipstone Professor of Art History at the University of Wisconsin–Madison, takes a fresh look at the life of this successful Bedford and Franklin County businessman. Martin has been researching John Hook (1746-1808) and other Virginia merchants for decades. Her vast knowledge of material culture and eighteenth-century consumer habits bring Hook’s business records to life.

Our personal histories are composed of many memories. For some people, the memories of particular places are more entwined with their pasts. Such is the case with Charles Stinson. His book, Hogtown, is composed of a series of recollections, vignettes, and photos that define not just Madison Heights but an entire era.
The big question is: Why Hogtown? This nickname was not always delivered as a compliment. The natural assumption is that lots of hogs were raised in Madison Heights. That possibility and others are explored. Back in Mr. Stinson’s day, almost everyone grew their own food and raised a hog or two, but this was not enough to earn the town such a lasting label. There is one explanation related to laws enacted in Lynchburg in the early nineteenth century (though you’ll have to read the book to get the details).