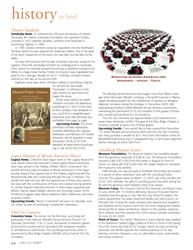 Historic Sandusky
Sandusky News. To celebrate the 200-year anniversary of Historic Sandusky, the Historic Sandusky Foundation has reprinted Charles Johnston’s 1827 captivity narrative. Johnston built Sandusky in Lynchburg, Virginia, in 1808.
In 1790 Charles Johnston joined an expedition into the Northwest Territory, where he was captured by Shawnee Indians. Two in his party of six were massacred on the spot; one was later burned alive at the stake.
He was held prisoner and his fate remained unknown except to his captors. Their trek eventually led them to a trading post in Sandusky, Ohio, where he narrowly escaped becoming a substitute husband and father to a large Indian family. Finally, his freedom was negotiated and paid for by a stranger, literally on his 21st birthday. Johnston forever referred to this day as his second birth.

Old City Cemetery
Cemetery News. This winter, for the first time, Lynchburg will participate in the national “Wreaths Across America Project.” On Saturday, December 13 at 12 noon, thousands of veterans’ graves all across the country will be decorated with evergreen wreaths in simultaneous ceremonies. The Lynchburg ceremony, which is sponsored by Blue Ridge Chapter, NSDAR, will be held at Old City Cemetery.

Lynchburg Museum System
Museum Foundation. The Museum System has benefited greatly from the generous bequests of Edith B. Lee. The Museum Foundation received a gift of $15,000 from the estate in August for Point of Honor; an earlier gift of $10,000 from the estate helped to complete the museum’s new exhibits.
Edith Brooks Lee was principal of Sheffield Elementary and served in a variety of other leadership roles with the Lynchburg Public Schools. She passed away on March 13, 2007, just a few months shy of her 100th birthday. Her gifts to Lynchburg were bountiful during her life and her generous spirit assisted many local causes.


^ Top
Previous page: From the Editor
Next page: Books of interest
Site Map