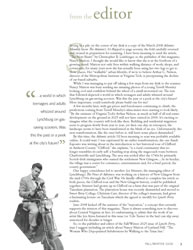 Sitting in a pile on the corner of my desk is a copy of the March 2008 Atlantic Monthly (now The Atlantic). It’s flipped to page seventy, the fold carefully reversed and creased in preparation for scanning. I have been meaning to send the article, “The Next Slum?” by Christopher B. Leinberger, to the publisher of this magazine, Nancy Marion. I thought she would like to know that she is in the forefront of a growing trend. Marion not only lives within walking distance of work, shops, and restaurants, for many years now she has actually been using her two legs to get to those places. Her “walkable” urban lifestyle, if we’re to believe Arthur C. Nelson, director of the Metropolitan Institute at Virginia Tech, is precipitating the decline of car-based suburbs.

While I was managing to put off taking a few steps from my desk to the scanner, Nancy Marion was busy sending me amazing photos of a young Terrell Moseley looking cool and confident behind the wheel of a small motorized car. The text that followed depicted a world in which teenagers and adults whizzed around Lynchburg on gas-saving scooters. Was this the past or a peek at the city’s future? More important, could somebody please build one for me?

A few months later, with gas prices and foreclosures continuing to climb, the predictions coming from Terrell Moseley’s alma mater were starting to look likely. "By the estimate of Virginia Tech’s Arthur Nelson, as much as half of all real-estate development on the ground in 2025 will not have existed in 2000. It’s exciting to imagine what the country will look like then. Building and residential migration seem to progress slowly from year to year, yet then one day, in retrospect, the landscape seems to have been transformed in the blink of an eye. Unfortunately, the next transformation, like the ones before it, will leave some places diminished."

By this time, the Atlantic article I'd been meaning to scan was probably available online. It could wait. I was captivated by an earlier transformation, the one Sandi Esposito was writing about in the introduction to her historical tour of Clifford in Amherst County. "Clifford," she explains, “is a rural community that no longer resembles its early self: a bustling stop along the stagecoach route between Charlottesville and Lynchburg. The area was settled after the 1740s by primarily Scotch-Irish immigrants who named the settlement New Glasgow.…In its heyday, the village was a center for commerce, entertainment and, for a brief period, the county government."

One happy coincidence led to another. Joe Stinnett, the managing editor of Lynchburg's The News & Advance, was working on a history of New Glasgow from the mid-1700s through the Civil War. He kindly offered to complete his article so both pieces, the Clifford tour and the New Glasgow history, could be published together. Stinnett had grown up in Clifford on a farm that was part of the original Tusculum plantation. The plantation house was recently dismantled and moved to Sweet Briar College. Christian Carr, director of the college’s museum, had given a fascinating lecture on Tusculum which she agreed to modify for Lynch's Ferry readers.

June 2008 kicked off the summer of the “staycation," a concept that certainly supports the mission of this magazine. There is always something new to discover about Central Virginia; in fact, it’s embarrassing to admit that the work of an artist like Jen Ayres featured in this issue (or ’Cile Turner in the last) can slip away unnoticed for decades or longer.
So, to the publisher and editor of the Fall/Winter 2025 issue of Lynch’s Ferry, may I suggest including an article about Nancy Marion of Garland Hill, "The Woman Who Depopulated Subdivisions by Walking to the Texas Inn."


^ Top
Previous page: Jen Ayres: A Remembrance of Her Life and Love of Art
Next page: History in Brief
Site Map