You are here: Archives » Spring 2019 » When Hollywood Came to Lynchburg: Two Important Events in the Life of the Paramount Theatre

When Hollywood Came to Lynchburg: Two Important Events in the Life of the Paramount Theatre 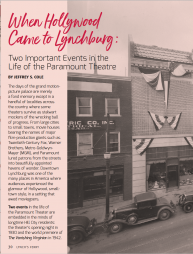 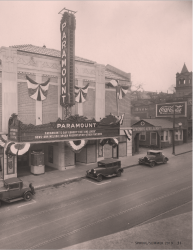 The days of the grand motion-picture palace are merely a fond memory except in a handful of localities across the country where some theaters survive as stalwart mockers of the wrecking ball of progress. From large cities to small towns, movie houses bearing the names of major film-production giants such as Twentieth-Century Fox, Warner Brothers, Metro-Goldwyn-
Mayer (MGM), and Paramount lured patrons from the streets into beautifully appointed havens of wonder. Downtown Lynchburg was one of the many places in America where audiences experienced the glamour of Hollywood, small-town style, in a setting that awed moviegoers.

Two events in the life of the Paramount Theater are embedded in the minds of longtime Hill City residents: the theater’s  opening night in 1930 and the world premiere of The Vanishing Virginian in 1942.