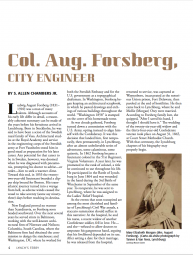 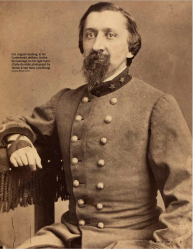 Ludwig August Forsberg (1831– 1910) was a man of many talents. Although accounts of his early life differ in detail, a reasonably coherent summary can be made of the years before his fortuitous arrival in Lynchburg. Born in Stockholm, he was said to have been a scion of the Swedish royal family of Vasa. Architectural studies at the Royal Academy and service in the engineering corps of the Swedish army at Fort Vauxholm stood him in good stead as preparation for his later career. Any potential for that career to be in Sweden, however, was doomed when he was diagnosed with pneumonia, prompting his octor to advise—or order—him to seek a warmer clime. Toward this end, in 1853 the twentytwo-year-old lieutenant boarded a clipper ship bound for Boston. His transatlantic journey turned into a voyage from hell, as adverse winds caused the vessel to take seventy (some say ninetythree) days before reaching its destination.
New England proved no warmer than Scandinavia, so Forsberg soon headed southward. Over the next several years he served stints in Baltimore, working with the well-known architectural firm of Niernsee and Neilson; Columbia, South Carolina, where the Baltimore firm had obtained the commission to design the statehouse; and Washington, DC, where he worked for both the Swedish Embassy and for the U.S. government as a topographical draftsman. In Washington, Forsberg began keeping an  rchitectural scrapbook, in which he pasted drawings and etchings of various buildings throughout the world. “Washington  1858” is stamped on the cover of his homemade tome.