You are here: Archives » Spring 2019 » Black Herman and the Entrepreneurial Rucker Family of Main Street, Amherst 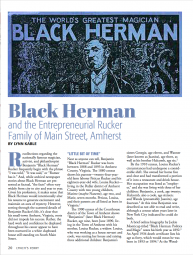 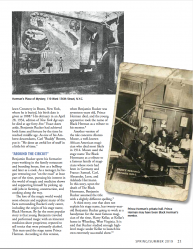 Recollections regarding the nationally famous magician, activist, and philanthropist Benjamin “Black Herman” Rucker frequently begin with the phrase “I was told,” “It was said,” or “Rumor has it.” And, while archival newspaper stories about Black Herman are presented as factual, “the facts” often vary widely from city to city and year to year. Given his profession, it makes sense that Black Herman would intentionally alter his resume to generate excitement and maintain an aura of mystery. However, sorting through the scattered details of Benjamin Rucker’s life, it’s clear that his small-town Amherst, Virginia, roots did not impede his success. Rather, the hard work and confidence he displayed throughout his career appear to have been nurtured in a white clapboard house still standing on South Main Street.
Near as anyone can tell, Benjamin “Black Herman” Rucker was born between 1888 and 1893 in Amherst County, Virginia. The 1880 census shows his parents—twenty-four-year-old farm laborer Peticus Rucker and his eighteen-year-old wife, Louisa Rucker—living in the Pedlar district of Amherst County with two young children, Maritte (maybe Nanette), age two, and
Marie, seven months. Peticus, Louisa, and their parents are all listed as born in Virginia.