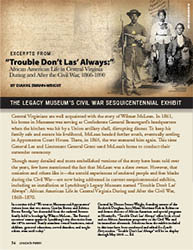 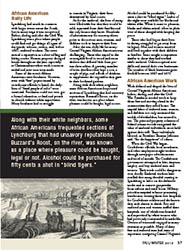 Lynchburg had much in common with larger towns across the South, but in many ways it was exceptional. Before, during and after the Civil War, Lynchburg was a place where people could find and get things: all types of dry goods, tobacco, cotton, and, before 1865, enslaved workers. The town earned a reputation as a slave-selling and hiring center. Human property changed hands throughout the year, especially at Christmastime when work contracts ended and new ones were made.
Some of the town’s African Americans were freedmen. However, even with “free” papers issued by courthouse officials in hand, the daily lives of “freed people of color” were restricted. Freedmen could not vote, get a formal education, or lead and preach in church without white supervision. Many freedmen had to struggle to remain in Virginia, their fates determined by local courts.
As for the enslaved, the lives of many were filled with fear that they would be sold, separated from their families and the only homes they knew. Hundreds of advertisements for runaway slaves point to the actions men, women, and children took to improve their lives.
After the war, daily life for many Central Virginia African Americans was challenging. Those who stayed in the countryside lived in wood and stone shelters that differed little from pre-war slave cabins. A growing number of town dwellers often kept a cow, a couple of pigs, and a flock of chickens to supplement the vegetables they grew in their backyard gardens.