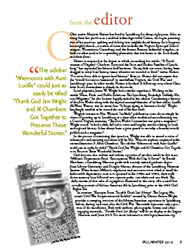 Ohio native Marjorie Huiner has lived in Lynchburg for thirty-eight years. After retiring from her position as a medical technologist with Centra, she began pursuing two of her passions: quilting and delving into neighborhood history. As it happens, her neighborhood—a section of town that includes the Virginia Episcopal School campus, Westminster Canterbury, and the former Ruesens industrial complex—is built on what used to be a sprawling plantation that was home to the Scott family and their slaves.
Huiner is surprised at the degree to which researching her article, “‘A Freedwoman of Virginia’: Charlotte Scott and the Scott and Rucker Families of Lynchburg,” has expanded her history-buff horizons. “As my kids can attest, having been dragged to every local history venue wherever we traveled or lived,” writes Huiner, “I’ve never been able to ignore local history.” Even so, Huiner did not expect that she “would become so immersed” in antebellum Virginia, the Civil War, and Lynchburg’s past. In other words, Huiner is hooked. A follow-up story about Charlotte Scott’s descendants is already in the works.
Local physician James W. Wright had a similar experience. Working on his article “Place, Pride, and Public Relations: The Lynchburg Foundry’s Unlikely History Magazine,” he also became happily mired in his subject. Condensing a history of the Iron Worker along with the myriad accomplishments of its first editor, Lucille McWane Watson, was no mean feat. “It keeps trying to become a book,” Wright laughingly emailed as he neared the end of his first draft.
Wright’s interest in Mrs. Watson’s “unlikely” publication came about simply by virtue of growing up in Lynchburg at a time when traditional manufacturing was a Central Virginia mainstay. “The Iron Worker I remember was quite a magazine,” Wright noted, “it had a slick, full color cover and lengthy articles relating to local and regional history. It has always been a great puzzle to me why a foundry would publish such a magazine.”
In the process of answering that question, Wright was able to record a series of informative and amusing anecdotes told by Mrs. Watson’s nephew, respected architectural historian S. Allen Chambers. The sidebar “Afternoons with Aunt Lucille” could just as easily be titled “Thank God Jim Wright and Al Chambers Got Together to Preserve These Wonderful Stories.”
Oral histories also enliven and inform a portion of another article in this issue, “Millner’s Department Store: ‘Synonymous With the City It Serves’” by Brandi Marchant, a Lynchburg Museum guide with a newly minted graduate degree from Liberty University, and Douglas Harvey, director of the Lynchburg Museum System. When former Millner’s employees and customers were asked to recall the fashionable department store as it operated in the 1940s and 1950s, their walk down memory lane followed two separate paths: one white and one black. The daily, matter-of-fact rules of segregation illustrated in this story offer a small but revealing portrait of African American life in Lynchburg prior to the 1964 Civil Rights Act.
In contrast, “Excerpts From ‘Trouble Don’t Las’ Always’: The Legacy Museum’s Civil War Sesquicentennial Exhibit” curated by Dianne Swann-Wright provides a sweeping overview of the African American experience in Lynchburg before, during, and soon after the Civil War. The article represents only a portion of the installation. Rich with artifacts, photographs, letters, and other
engaging materials, “Trouble Don’t Las’ Always” will be on display at the Legacy Museum until June 2014. For more information visit legacymuseum.org.