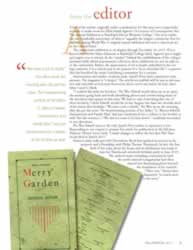 A few of the articles originally under consideration for this issue were temporarily set aside to make room for Ellen Schall Agnew’s “A Century of Contemporary Art: The Annual Exhibition at Randolph-Macon Woman’s College.” Her story marks the one hundredth anniversary of what is “arguably the longest continuous (but for one year during World War I) original annual exhibition devoted to American art in the United States.”
The anniversary exhibition is on display through December 10, 2011. If you haven’t been to the Maier Museum at Randolph College lately, Agnew’s piece might just inspire you to attend. As the “catalyst” behind the establishment of the college’s internationally admired permanent collection, these exhibitions are not an add-on to the curriculum. Rather, the appreciation of art is deeply embedded in the college’s mission; it is a critical step in the pursuit of a “more abundant life”—a pursuit that has benefited the entire Lynchburg community for a century.