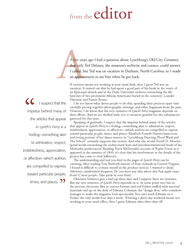 A few years ago I had a question about Lynchburg’s Old City Cemetery that only Ted Delaney, the museum’s archivist and curator, could answer. I called, but Ted was on vacation in Durham, North Carolina, so I made an appointment to see him when he got back.

If vacation means not working at your usual desk, then I guess Ted was on vacation. It turned out that he had spent a good part of his break in the vestry of an Episcopal church and in the Duke University archives, researching the life histories of two prominent African Americans buried in the cemetery: Leander Harrison and Fannie Rosser.

I do not know what drives people to do this, spending their precious spare time carefully piecing together photographs, writings, and other fragments from the past. However, I do know that the very existence of Lynch’s Ferry magazine depends on their efforts. And we are thrilled with, not to mention grateful for, the submissions garnered for this issue.

Speaking of gratitude, I suspect that the impetus behind many of the articles that appear in Lynch’s Ferry is a feeling—something akin to admiration, respect, indebtedness, appreciation, or affection—which authors are compelled to express toward particular people, times, and places. Elizabeth Forsyth Harris’s humorous and loving portrait of her dance mentor in “Lynchburg Dancing: Floyd Ward and Her School” certainly supports this notion. And why else would Terrell D. Moseley spend weeks researching the architectural feats and interdenominational feuds of his Methodist predecessors? Reading Travis McDonald’s account of Poplar Forest as it appeared in the summer of 1806, it’s clear that his involvement in the details of the project has come to rival Jefferson’s.

The understanding and zeal you find in the pages of Lynch’s Ferry can be catching. After reading Tom Burford’s history of fruit orchards in Central Virginia, I found it difficult to contain myself in the produce section. I wanted to shake oblivious, uninformed shoppers: Do you have any idea where this Fuji apple came from? C’mon people. Take pride in your fruit!

Obsessive behavior gets a bad rap these days and I suppose there are extremes. But the very existence of Lynch’s Ferry depends on it. At some point very late in the process, electronic files in various formats and real folders stuffed with assorted materials end up on the desk of Edwana Coleman, the “design diva,” who somehow manages to make the magazine look spectacular. You can’t reach Edwana on a Friday; she only works four days a week.  If having a three-day weekend means not working in your usual office, then I guess Edwana takes three days off.