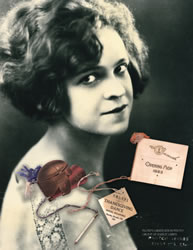 Soon after I was approached to write and speak about Floyd Ward, founder of Lynchburg’s longstanding Floyd Ward School of Dancing, her nephew Peter Ward and his wife Jessica invited me to their house for dinner on the occasion of a Ward family gathering.

At Jessica’s gentle prompting, each member present evening shared memories of their illustrious, eccentric, talented, and intrepid aunt. Taking turns around the table, they recalled stories ranging from the funny to the outrageous. Chris Ma, Floyd’s nephew-in-law had the last turn. He had been silent during the process. There was a significant pause before he spoke. Well,” he finally said, “she was certainly the first woman ever met who carried a firearm in her handbag.”

Carrying a concealed weapon was not an isolated eccentricity of Floyd’s but one in a long list of unconventional behaviors that of Lynchburg’s formidable women produced many such individuals. carried a pistol for practical teaching career she owned and twenty-two dancing schools spread stretching as far west as Pikeville, she would return from teaching late at night over dark mountainous have felt the need of a handgun doubt she needed that added that she could have held off her will.

The stories told about the in particular undoubtedly have some were so embellished by apocryphal. The most outrageous about Floyd by Floyd.


About the author: Elizabeth Forsyth Harris, a fourth generation Lynchburger, was a student at the Floyd Ward School. Her thirty-year dance career included touring Central Virginia with her own dance company, Dance by Two, and teaching dance along with history of art classes at Seven Hills School and Virginia Episcopal School. She graduated from Sweet Briar College with a degree in history of art and continued that academic pursuit, earning her doctorate from the University of Virginia. Over the years many regional arts organizations have benefited from her energy and insight. Harris is currently serving as a trustee for the Virginia Museum of Fine Arts and as a board member for Opera on the James. She wishes to thank the numerous individuals who provided information for this article, especially members of the Ward family who generously shared stories, mementos, and photos of their smart and spirited relative.


^ Top
Previous page: Fall 2006
Next page: A City upon a Hill: A History of the Old City Cemetery in Pictures
Site Map