You are here: Archives » Spring 2017 » From Lynchburg to Liberia

From Lynchburg to Liberia 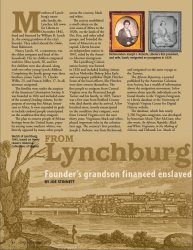 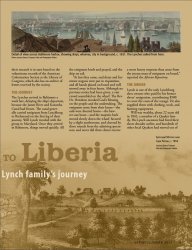 Members of Lynchburg’s namesake family, the Lynches, left town for Liberia in December1842, freed and financed by William B. Lynch Jr., the young grandson of the city’s founder. They sailed aboard the Globe, from Baltimore.
Nancy Lynch, 41, a seamstress, was the eldest emigrant and head of the household. Her six children emigrated with her. Eliza Lynch, 30, and her five children were also aboard, along with two other young Lynch children. Completing the family group were three brothers, James Taylor, 25, Charles Willis, 23, and Francis Miller, 17. In all, nineteen emigrated.
The families went under the auspices of the American Colonization Society. It was founded in 1816 and included some of the country’s leading citizens, for the purpose of moving free African Americans to Africa. It soon expanded its goals to include enslaved people emancipated on the condition that they emigrate.
The plan to remove people of African heritage from the United States, popular among some southern whites, was bitterly opposed by many other people across the country, black and white.
The society established a small colony on the west coast of Africa in the 1820s, on the lands of the Dei, Kru, and other tribal groups, and founded the town of Monrovia as its capital. Liberia became an independent nation in 1847, ruled by the Americo-Liberian immigrants.
The Lynchburg Colonization Society was formed in 1826 and included leading citizens such as Methodist Bishop John Early and newspaper publisher Elijah Fletcher. Some of the local officers, like Fletcher, were slave owners themselves. The first people to emigrate from Central Virginia were the Reverend Joseph Turner and his family, in 1829. Turner was a free man from Bedford County who died shortly after he arrived. A few hundred more, mostly emancipated on the condition they emigrate, went from Central Virginia over the next thirty years. Virginians, black and white, played important roles in the colonization saga. The country’s first president, Joseph J. Roberts, was from Richmond, and emigrated on the same voyage as the Turners.
The African Repository, a journal published by the American Colonization Society, has a wealth of information about the emigration movement. Information about specific individuals can be found thanks to the Virginia Emigrants to Liberia database at the University of Virginia’s Virginia Center for Digital History website.
The database, which lists nearly 3,700 Virginia emigrants, was developed by historians Marie Tyler-McGraw, who also wrote An African Republic: Black and White Virginians in the Making of Liberia, and Deborah Lee. Much of their research is in turn based on the voluminous records of the American Colonization Society at the Library of Congress, which also has an archive of letters received by the society.

The Journey
The Lynches arrived in Baltimore a week late, delaying the ship’s departure, because the James River and Kanawha Canal had frozen. The canal generally carried emigrants from Lynchburg to Richmond on the first leg of their journey. Will Lynch traveled with the group to Maryland. Once they arrived in Baltimore, things moved quickly. All the emigrants knelt and prayed, and the ship set sail.
“At last they came, and drays and furniture wagons were put in requisition, and all hands placed on board and well stowed away in four hours. Although no previous notice had been given, a vast crowd assembled on the wharf. The Rev. Dr. Henshaw invoked God’s blessing on the people and the undertaking. The emigrants arose from their knees—the sails were sheeted home—the hawser cast loose—and the majestic bark moved slowly down the wharf, favored by a slight northwester, and cheered by three rounds from the admiring spectators; and never did three cheers receive a more hearty response than arose from the joyous mass of emigrants on board,” reported the African Repository.