You are here: Archives » Spring 2012 » The Construction of Lynchburg’s First Skyscraper

The Construction of Lynchburg’s First Skyscraper 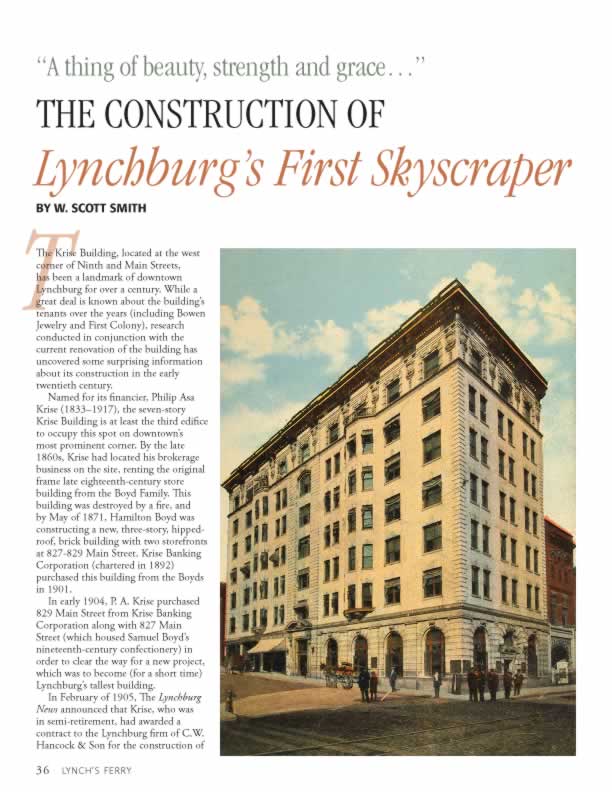 The Krise Building, located at the west corner of Ninth and Main Streets, has been a landmark of downtown Lynchburg for over a century. While a great deal is known about the building’s tenants over the years (including Bowen Jewelry and First Colony), research conducted in conjunction with the current renovation of the building has uncovered some surprising information about its construction in the early twentieth century.

Named for its financier, Philip Asa Krise (1833–1917), the seven-story Krise Building is at least the third edifice to occupy this spot on downtown’s most prominent corner. By the late 1860s, Krise had located his brokerage business on the site, renting the original frame late eighteenth-century store building from the Boyd Family. This building was destroyed by a fire, and by May of 1871, Hamilton Boyd was constructing a new, three-story, hipped-roof, brick building with two storefronts at 827-829 Main Street. Krise Banking Corporation (chartered in 1892) purchased this building from

W. Scott Smith is a senior planner at the Region 2000 Local Government Council and principal at HistoryTech, a local historic preservation consulting firm. He specializes in downtown revitalization, community development, architectural history and documentation, historic rehabilitation tax credits, and historic land tract mapping. Smith currently serves on Lynchburg’s Historic Preservation Commission and on the boards of directors of the Virginia Downtown Development Association, the Fifth Street Community Development Corporation, and the Virginia Chapter of the American Planning Association. Scott studied history and marketing at Lynchburg College, and he and his family reside in a circa 1813 home in the Court House Hill National Historic District.