You are here: Archives » Spring 2013 » Journey to the Land of Lynches

Journey to the Land of Lynches 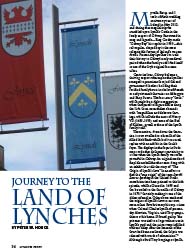 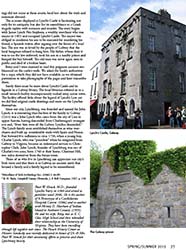 A human skull with two bones crossed beneath and carved in black marble, above which is an inscription—This memorial of the stern and unbending justice of the chief magistrate of the city James Lynch Fitz-Stephens elected mayor A. D. 1493 who condemned and executed his own guilty son Walter on this spot. Above this inscription is a window, the remains of the old jail which is situated beside the St. Nicholas Church on Lombard Street, now Market Street, Galway. The other part of the jail, now destroyed, extended along a small street still called “Dead Man Lane.”
This mute testimony is all that remains of an episode which has most probably given to the world the name “Lynch Law” and a story about the rigid and stern justice of a great man.

James Lynch Fitz-Stephens, an opulent merchant and financial inhabitant of Galway, was elected mayor in 1493, at which time a regular and friendly intercourse existed between the town and several parts of Spain—Galway having the monopoly of the wine trade of Ireland and even part of England.
The mayor from youth had been distinguished for his public spirit. From commercial motives on all occasions he encouraged this intercourse that proved lucrative to his townsmen as well as to the Spaniards. He went on a voyage to Spain and was received with the utmost hospitality, being entertained when at Cadiz by a wine merchant named Gomes.
Upon his departure for Galway, and out of a desire to reciprocate and show his gratitude for the hospitality he had received, he begged that Gonsalvo Gomes, the nineteen-year-old son of the house, should accompany him and that he would take paternal care of him during his stay, and provide safe travel whenever he desired to return.
Lynch introduced the young stranger to his family where he was received with the kindness of heart and hospitality which has ever characterized the Irish. His own son, Walter, two years older, became the constant companion. Walter was considered one of the finest youths of his time. He was tall with great muscular strength and intrepid spirit in addition to uncommon vigour of mind and body. These qualities, with the rank of his father, made him the idol of the people and a great favorite amongst his own class. But this popularity went to his head and, to the sorrow of his father, a tendency towards pleasures and dissipation increased. His father hoped that the influence of the serious young Gomes would perhaps help to reform him. Also he had begun to pay honorable attention to Ann Blake, daughter of one of the most respected citizens, who, if they married, would unite two great fathers and perhaps help to steady him.

Peter W. Houck, M.D., founded Lynch’s Ferry in 1988 and served as publisher until 2006. He is the author of A Prototype of a Confederate Hospital Center (1986) and co-author with Mintzy D. Maxham of Indian Island in Amherst County (1993). He and his wife, Betsy, met at E. C. Glass High School and then rekindled their relationship at the University of Virginia. They have been travelling through life together ever since. The Houck History Center at Historic Sandusky was recently dedicated in honor of Dr. & Mrs. Peter W. Houck for their unstinting efforts to preserve and share Lynchburg history.