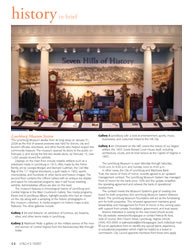 The museum, located at the corner of Fourth and Monroe streets, will be open to the public from 10 a.m. until 3 p.m., with a program to take place at noon.  Other Juneteenth events set for the same time and place include music, arts and crafts, vendors, activities for children, a health fair, and black history tours of the Old City Cemetery.

The museum’s collection committee is responsible for artifacts displayed in both exhibits. The guest curator is Dianne Swann-Wright, director and founding curator of the Frederick Douglass–Isaac Myers Maritime Park in Baltimore. The exhibit designer is Betsy Johnson-Whitten, formerly curator of collections for the Lynchburg Museum System.

Jones Memorial Library
There is no need to panic. Yes, it’s true: Phillip Wayne Rhodes, the director of the Jones Memorial Library, is officially retiring on June 30, 2008. But rest assured he will be returning, filling in as a volunteer on Tuesday nights and alternating Saturdays, cataloging books and manuscripts and doing the bookkeeping.

Rhodes began doing research at the library in 1969 in an effort to fill in some blanks in his family tree before his son was born. That same year, with a freshly minted M. Ed. from Lynchburg College, he went to work supervising vocational instructors at the Central Virginia Training Center. In 1972, he left to join the Campbell County school system, where he taught special education.

In the summer of 1981, Rhodes volunteered at the Jones. By the following fall he was employed there full time, serving as the research services coordinator of the Virginia Room. The rest, as he puts it, is history. He continued his education, earning certification as a genealogist and genealogical records specialist. In 1998, he became the director of the library.

During his 26-year tenure, the toughest job Rhodes had to tackle was making the move from the old building to the new facility. “After the move was completed,” he says, “the books were arranged in the wrong order, so I had to rearrange everything. Then a few years later, it was decided to separate the manuscript collections and books, so they would be on separate sides of the stack area. I think the idea was to have a fence separating the two in case we ever went to ‘open’ stacks so the patrons could browse through the books. So, I had to rearrange everything—again!”

Rhodes knows the library so well, he could do his job blindfolded. And he has had the opportunity to prove it. “My funniest episode,” he explains, “was one night when the lights went out and only the emergency lights in the reading room were on. One patron still had light enough to work and she requested a book, so I headed back into the stacks (which had no lights whatsoever). I counted the rows then went to the section and retrieved the book.  When I came back with the book she said, ‘How did you ever find it?’  I said, ‘It’s because I know where my “babies” live.’ But after so much rearranging, who wouldn’t know?”


^ Top
Previous page: From the Editor
Next page: Books of Interest
Site Map