You are here: Archives » Spring 2006 » No Matter How Long: The Struggle to Integrate

No Matter How Long: The Struggle to Integrate the Public Schools in Lynchburg, 1954–1970 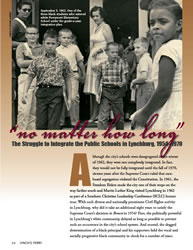 Although the city’s schools were desegregated in the winter of 1962, they were not completely integrated. In fact, they would not be fully integrated until the fall of 1970, sixteen years after the Supreme Court ruled that race-based segregation violated the Constitution. In 1961, the Freedom Riders made the city one of their stops on the way farther south and Martin Luther King visited Lynchburg in 1962 as part of a Southern Christian Leadership Conference (SCLC) lecture tour. With such diverse and nationally prominent Civil Rights activity in Lynchburg, why did it take an additional eight years to satisfy the Supreme Court’s decision in Brown in 1954? First, the politically powerful in Lynchburg’s white community delayed as long as possible to prevent such an occurrence in the city’s school system. And second, the dogged determination of a black principal and his supporters held the vocal and socially progressive black community in check for a number of years.

Grade-A-Year Gradualism
Nationally, the start of the 1960s marked a new era of hope for African Americans struggling for equality in American society. But, as many would soon discover, John F. Kennedy’s presidency did little more for Civil Rights than had his predecessor, Dwight Eisenhower. The true turning point for black Americans was Kennedy’s assassination in November of 1963. In Kennedy’s successor, Lyndon B. Johnson, black Americans found a leader determined to change federal policy in regard to school segregation.

About the writer: Henry Faulkner Heil was born and raised in Lynchburg where he attended Paul Monro, Linkhorne Middle, and Virginia Episcopal School. He earned a B.A. from Davidson College in North Carolina and an M.A. in U.S. History at the University of South Carolina. He currently resides in Woodberry Forest, VA, where he is an instructor in history at Woodberry Forest School. This article, which has been edited for Lynch’s Ferry readers, was excerpted from chapters two and three of his master’s thesis. Heil’s interest in his thesis topic was spurred on by his experiences both in public and then private schools in Lynchburg.

^ Top
Previous page: Lynchburg in the Decade of the 1960s
Next page: The Great Society, Vietnam, and Central Virginia
Site Map