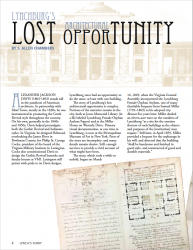 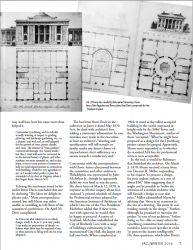 Alexander Jackson Davis (1803-1892) stands tall in the pantheon of American architects. In partnership with Ithiel Town, mostly in the 1830s, he was instrumental in promoting the Greek Revival style throughout the country. On his own, generally in the 1840s and 1850s, Davis helped promulgate both the Gothic Revival and Italianate styles. In Virginia, he designed Belmead, overlooking the James River in Powhatan County, for Philip St. George Cocke, president of the board of the Virginia Military Institute in Lexington. Cocke also commissioned Davis to design the Gothic Revival barracks and faculty houses at VMI. Lexington still points with pride to its Davis designs. Lynchburg once had an opportunity to do the same, at least with one building.
The story of Lynchburg’s lost architectural opportunity is complex. Portions of the narrative remain in the city, both at Jones Memorial Library (in a file labeled Lynchburg Female Orphan Asylum Papers) and at the Miller Home on Westerly Drive. Primary visual documentation, at one time in Lynchburg, is now at the Metropolitan Museum of Art in New York. Parts of the story are incomplete, and many details remain elusive. Still, enough survives to provide a vivid account of what might have been.
The story, which took a while to unfold, began on March 16, 1849, when the Virginia General Assembly incorporated the Lynchburg Female Orphan Asylum, one of many charitable bequests from Samuel Miller (1792–1869) to his adopted city. Almost five years later, Miller deeded an eleven-acre tract on the outskirts of Lynchburg “as a site for the erection thereon of such buildings as the objects and purposes of the [institution] may require.” Still later, in April 1859, Miller provided a bequest for the orphanage in his will, and directed that the building “shall be handsome and finished in good style, and constructed of good and durable materials.”

The Civil War and its aftermath interrupted whatever progress might have been made to transform Miller’s legacy into reality, and it was not until June 10, 1868, that “a meeting of [the] Citizens of Lynchburg” was held to discuss the proposed new orphanage. Miller himself helped advance the project that same year by adding forty-six acres to his initial gift of land, and delivered securities worth $123,600 to the fledgling institution. Then, on March 15, 1869, twelve days before he died, he increased that gift by $57,285. Eventually, Miller’s monetary bequests amounted to over $300,000, virtually guaranteeing that the building would not only be “handsome and in good style,” but that the orphanage would be endowed and operated handsomely as well.  Fortunately, the donor’s last name eventually provided a less Dickensian title than the original appellation. The Lynchburg Female Orphan Asylum soon became known as the Miller Asylum, and eventually as the Miller Home. Unfortunately, Miller’s hope that it would be “handsome and in good style” was not to be.
After the will was probated, the board of directors, appointed by Lynchburg’s circuit court, went to work. At their November 1869 meeting, President Ambrose Rucker appointed John G. Meem, Charles W. Button, and George D. Davis “to be styled a Committee on ‘Plan of Building’,” and directed them “to embark on a trip to visit similar establishments in northern cities.” Their first stop was New York, followed by Philadelphia, Baltimore, and Washington—all accomplished in January and February 1870. The group not only visited “similar establishments,” they visited and interviewed architects as well.  Apparently, they carried with them what would today be called a scope of work, along with a bid, or request, for proposals. That they were neophytes in their task can be judged from the responses they received after their return to Lynchburg.
Among the many facilities the committee visited in New York were municipal institutions on Blackwell’s Island. Operated by the city’s Department of Public Charities and Correction, their names still send chills to the reader, especially when one considers that the Lynchburg group was looking for inspiration for an orphanage. Among the island’s institutions listed in a pamphlet preserved at Jones are “Idiot Asylum,” “Blind Asylum,” “Morgue,” and “City Cemetery.” Nowhere is an orphanage mentioned.
The group also visited St. Luke’s Hospital, founded in 1858 as a charity hospital, and  “presided over by… Dr. Muhlenburg.” Although the building was apparently the inspiration for the plan ultimately adopted for the Miller Home, Alexander Jackson Davis had nothing good to say about it. Writing to Meem on Feb. 25, 1870, he advised that St. Luke’s was “totally unlike the idea I had of your wants, inasmuch as it is … irregular in form, expensive in execution, and limited in accommodation. It has also two towers, each 100 ft. high… and useless.” He also stated that he “had hoped to see your committee once again before you left, in order to lay before you something more relevant to the purpose of an Orphan Asylum than I was enabled to do on the instant of a first visit.”