You are here: Archives » Fall 2014 » Where Carry Nation Did Not Go: Prohibition in the Blue Ridge Mountains

Where Carry Nation Did Not Go: Prohibition in the Blue Ridge Mountains 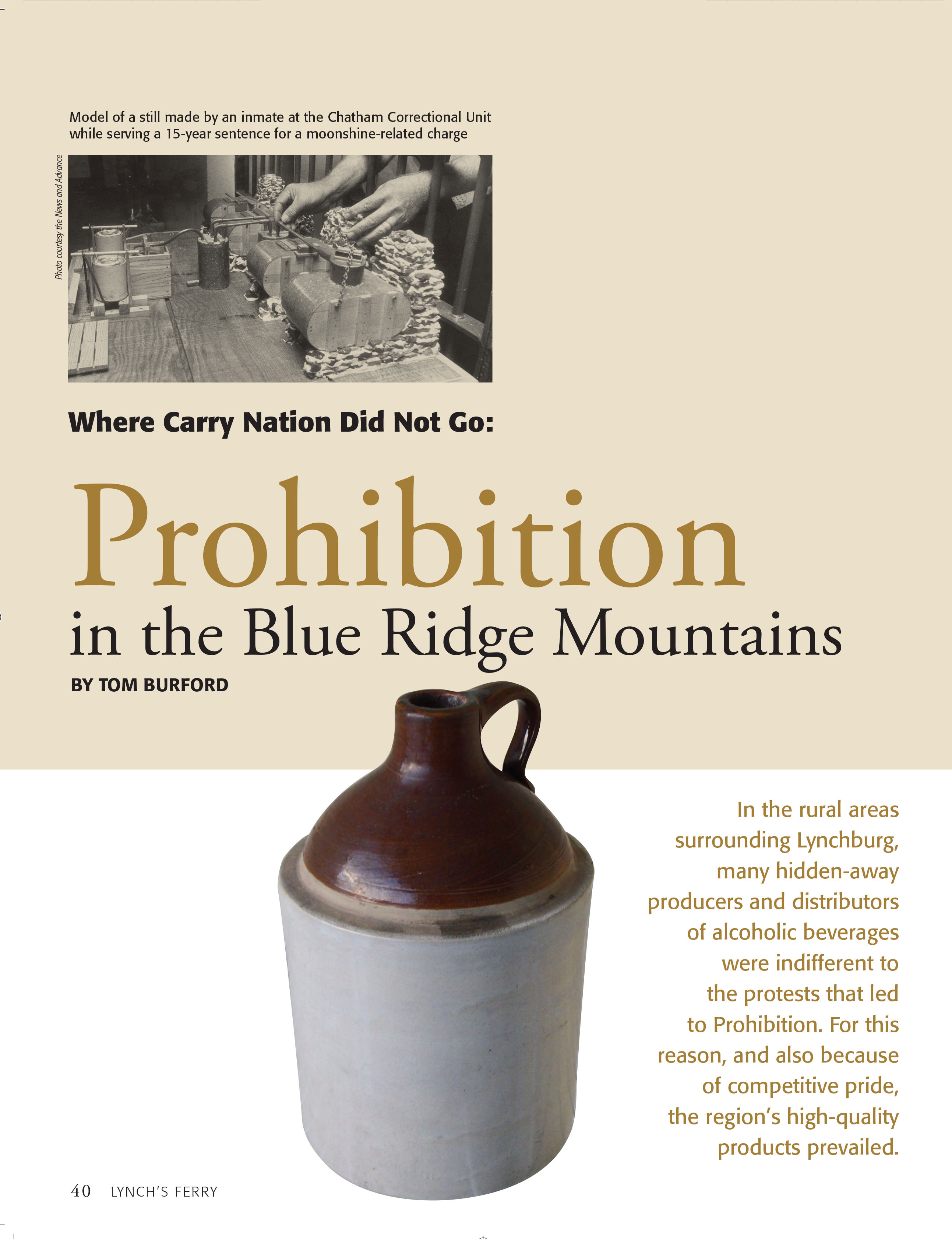 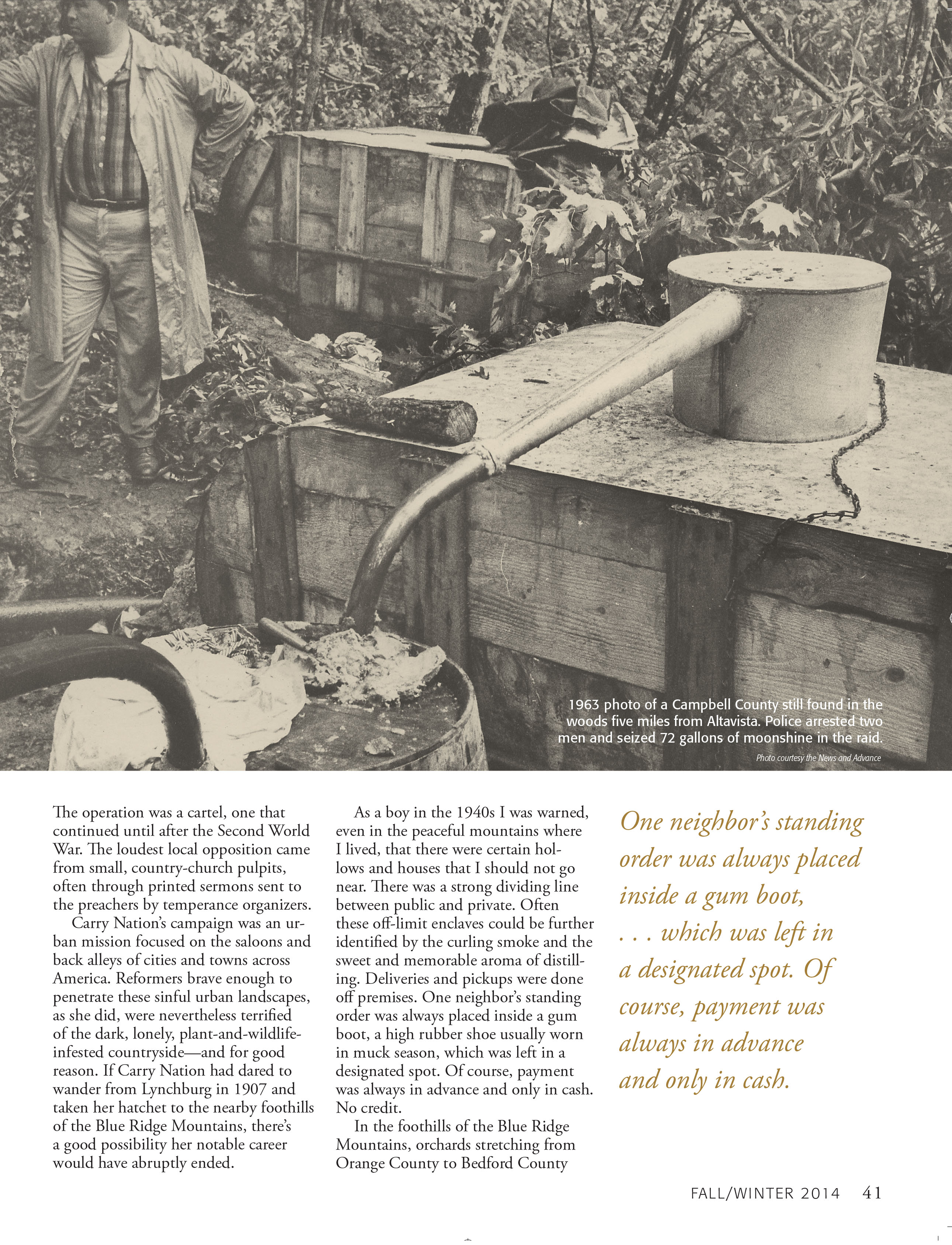 The operation was a cartel, one that continued until after the Second World War. The loudest local opposition came from small, country-church pulpits, often through printed sermons sent to the preachers by temperance organizers. Carry Nation’s campaign was an urban mission focused on the saloons and back alleys of cities and towns across America. Reformers brave enough to penetrate these sinful urban landscapes, as she did, were nevertheless terrified of the dark, lonely, plant-and-wildlifeinfested
countryside—and for good reason. If Carry Nation had dared to wander from Lynchburg in 1907 and taken her hatchet to the nearby foothills of the Blue Ridge Mountains, there’s a good possibility her notable career would have abruptly ended. As a boy in the 1940s I was warned, even in the peaceful mountains where I lived, that there were certain hollows and houses that I should not go near. There was a strong dividing line between public and private. Often these off-limit enclaves could be further identified by the curling smoke and the sweet and memorable aroma of distilling. Deliveries and pickups were done off premises. One neighbor’s standing order was always placed inside a gum boot, a high rubber shoe usually worn in muck season, which was left in a designated spot. Of course, payment was always in advance and only in cash. No credit.
In the foothills of the Blue Ridge Mountains, orchards stretching from Orange County to Bedford County grew the remarkable Albemarle Pippin and another classic apple known as the Winesap. This variety and one called Parmar made exquisite apple brandy. During Prohibition brandy was in great demand in Tidewater Virginia and elsewhere. Expensive, long, heavy-duty touring cars, the type often associated with gangsters in Chicago, would head to Richmond on Route 60 East with the back end nearly dragging the road to make deliveries to Richmond’s elegant John Marshall Hotel, where many out-of -town legislators were housed. The busiest time was when the legislature was in session.

Tom Burford is an orchard and nursery consultant specializing in restoration, re-creation, and design at historic sites and private estates. His book, Apples of North America, was published by Timber Press in 2013 and has received the American Horticultural Society 2014 Book Award. It also has been nominated for the 2014 Library of Virginia Book Award. He is the author of Apples: A Catalog of International Varieties (1991,1998), a reference work on hundreds of apples, and has written books and manuals on grafting, orchard design, and fruit-tree culture.
A native of Amherst County, Virginia, Burford presents workshops and seminars nationally and continues to search for “lost” fruit. His life as a fruit explorer is described in Frank Browning’s book Apples (North Point Press, 1999). Articles on Burford’s work have appeared in many national magazines, including US News & World Report, The American Gardener, House Beautiful, Town and Country, Southern Living, Garden Design Magazine, Kitchen Garden, Vegetarian Times and Gourmet as well as newspapers worldwide, including a feature article on the Pippin apple in the New York Times in October 2004.